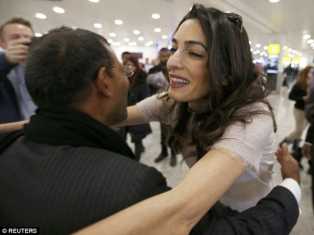 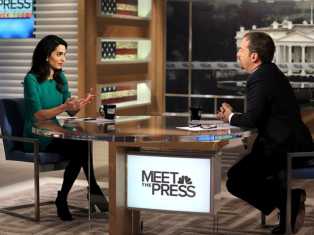 Born in Lebanon to a prominent Druze family, Amal Clooney (nee Alamuddin) gets her influences from her parents. Both highly educated, her father is a prominent Lebanese citizen, and her mum is a foreign editor for Al-Hayat newspaper.
She is not a celebrity- so she claims. But we beg to differ. In 2014, she got married in a widely publicized event, to George Clooney. In addition to being a prominent international lawyer, and wife to a Hollywood powerhouse, Amal Clooney is also a style icon. She is always dressed smartly, classy, and occasion-appropriate. A huge fan of designer labels, Amal is usually spotted wearing outfits which cost upwards of thousands of pounds. She loves her sunglasses too. With clothes and accessories “on point”, she provides style inspiration to many fashion aficionados. But she never forgets who she is, or gets carried away by the glamor of her life. Showing up with her husband to the 2015 Golden Globes in the wake of the attack on the Charlie Hebdo office in Paris which left 12 people dead- including some of France’s most prominent journalists- she proudly displayed the “Je suis Charlie” pin on her Dior handbag.

Beyond the glitz and glamor that trails her personal life, what has endeared so many to Amal, is her definitiveness of purpose. In an age where so many so-called celebrities use their status for mostly selfish purposes, Amal uses her unique position to champion the cause that is most important to her- human rights. A “darling of the media”, she recognizes this, and uses it to her advantage in her various campaigns for justice. And in so doing, she reminds us of another celebrity figure, who is also a champion of worthy causes- Angelina Jolie. Amal is as brave as she is beautiful…as smart as she is sensual and seductive…and as dogged and determined as she is delicate and delightsome! Aptly (and fondly) referred to as the “smarty-pants of the family” by her darling husband George, Amal Clooney is a well-blended mix of style and activism that is not often seen in individuals. She is also a philanthropist, creating a scholarship which sends one female Lebanese student each year to college in Dilijan, for a 2year international scholarship programme.
Amal Clooney is a rare gem, a true inspiration, and we can only wish her the best as she continues to champion the cause for human rights all around the world. She coyly states that she does not see herself as a celebrity, but also adds realistically that “if there’s more attention paid for whatever reason, then I think it’s good”. Ride on Mrs. Clooney; we think same too.
Posted by Buchi Obichie at 8:36 AM